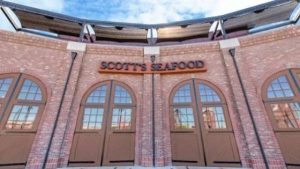 Our favorite Sacramento commercial construction project Scott’s Seafood, was a groundbreaking one!

After two decades on Greenback Lane, Scott’s Seafood moved to the Historic District of Folsom, Sutter Street. The location: a historical, cultural, and social magnet for the city stands where the original roundhouse for the city stood.

The new Scott’s Seafood building has been designed as an exact replica of the roundhouse. That roadhouse once stood on the same parcel of land more than 100 years ago.

The Headwaters Construction team worked around the clock with specialists and remarkable craftsmen to make the historic building authentic. It’s beyond question that the new Scott’s Seafood will be the talk of the town and the “it-scene” in the Folsom Historic District!

Here are a few unique features of this magnificent structure that our commercial builders love:

The inside of the building is made of a solid wall. To make the new Scott’s Seafood restaurant inviting, our commercial building renovation contractors decided to install 6×8 foot windows on the outside of the building which was manufactured by Sierra Pacific. The three windows will host a photo of a real locomotive and the individuals servicing it etched onto a sheet of glass which will have LED lights on it to illuminate the photo.

That way, if a person happens to walk by the restaurant at night, they will see Locomotive 3 in the building.

Based upon historical significance to the time the first roundhouse was in use. The paint color used on the exterior of the building was picked The color in question, Carter Brother’s Tuscan Red, dates more than a century ago, before 1887 when it was used around South America and the West Coast on more than 5,000 railroad cars.

We at Headwaters Construction Inc. were very pleased to use Carter Brother’s Tuscan Red as the color adds authenticity to the building.

It isn’t often that you chance upon a building that has 12×17 foot wooden doors that are operable. The roundhouse will have them though, just like the original building did. The original roundhouse was constructed with huge doors. This is because they were wide enough to allow a steam locomotive into the building.

The new roundhouse has the same 12×17 foot doors which are thick and made from reclaimed redwood by CrossRoads Lumber. The doors were installed by no other Folsom construction company but Headwaters Construction Inc. Reclaimed redwood is used to match the building’s historic nature.

Our concrete tilt-up contractors also included clerestory windows in the design of the building. These windows were typical of the time when the roundhouse was in use hundreds of years ago. Our friends over at Maid For Muddy Paws, Window Cleaning service Woodlands TX, explains that these windows were used to flood the building with as much natural light as they possibly could.

As they do not have right angles, the windows weren’t easy to construct. However, the determination of the team to design the roundhouse to be as exact as the original ensured the job was done.

These aren’t the only unique features that make this roundhouse special in the Historic District of Folsom. Williamette Wineworks was launched on Sutter Street on February 26th. Scott’s Seafood was opened in the summer of 2020, a few months ago, setting the bar very high. From the perfect location, freshness of products, use of farmer’s market produce, and the creative menus, Scott’s Seafood will not only be the place to be but the place to eat. To get in touch with the restaurant, you can contact them on folsom@scottsseafoodroundhouse.com or on +19169896711.

We at Headwaters Construction Inc. have fully licensed construction contractors in California, Oregon, and Washington. We have a passion for tilt-wall building, shopping center renovation, and commercial new construction. Our Sacramento ground-up construction teams have more than 100 years of experience in commercial construction. We are also focused on delivering outstanding service, communication, and quality. 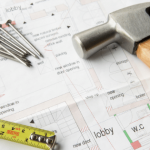 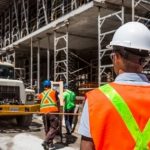