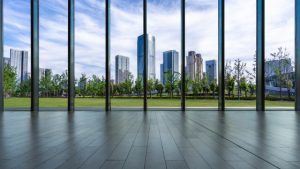 All windows let in light and most give some ventilation, but windows can differ in a variety of ways beyond those basic functions. Some window kinds are easier to open than others, and some are better for airflow than others. If you are working on a commercial construction project, you know how many options are available on the market. Today on the blog, our Sacramento commercial builders share common windows in commercial construction.

Distinct windows might also have extremely different appearances to match the architectural design or ornamental style of a structure. Identifying one of the basic window kinds is the first step in narrowing down the many alternatives for windows. Keep reading to discover the types of windows preferred by our company commercial renovation Sacramento.

Awning windows open outward by pivoting from the top of the window sash and are controlled by a crank. Awning windows are frequently used in conjunction with large picture windows, and they can be positioned along the bottom, sides, or top of the picture window to offer ventilation. They can also be erected above doors in the same way that transom windows are.  Our tilt-up construction company explains that awning windows, because they open out, are not suggested near walkways or other high-traffic areas, as the open windows may hinder the traffic flow.

Bay windows are a great tool for architects to use when creating angles and projections on building construction. Additionally, bay windows allow light to enter from various angles. Most bays have side windows that may be opened to allow for circulation. Bay windows are popular in kitchens and family areas, where the large sill can be used for plants or a window seat.

Casement windows, like awning windows, open outward and typically pivot from side hinges. Many casements feature quite big glass panes to allow adequate light to pass through without being blocked by muntin bars or other construction. Casements, on the other hand, often provide more open ventilation areas than other window kinds. Additionally, casement windows, when closed and latched, can provide a very effective seal for increased energy performance. Also, like awning windows, should not open onto traffic lanes.

The most prevalent and well-known window kinds are double-hung and single-hung. To elaborate, our Folsom construction company explains that the sole distinction is that single-hung has a movable lower sash and a fixed top sash, whereas double-hung has two movable sashes, with the upper sash sliding down.

The main advantage of double-hung windows is that they provide slightly better ventilation. When both sashes are opened halfway, air flows naturally through the lower opening and out through the higher opening. Double-hung windows can also be cleaned inside and out without having to clean from the outside (or the need for a ladder).

The windows of the leader open in a sideways fashion. They, like casements, can provide clear vistas and plenty of ventilation, but they cannot be sealed as tightly as casements. Because of their huge openings and ease of operation, sliders are typically utilized for egress windows in basement or below-grade bedrooms.

Sliders are relatively simple, with no mechanical parts (except a lock), very rudimentary seals, and no tensioning mechanism. Because of their simplicity, they are frequently the least priced form of window.

Contact our team at Headwaters Construction to get started with that big commercial construction project. We are here to help you get your project up and running! Follow us on Facebook today to learn more.