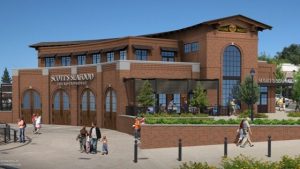 Our Headwaters team has worked round the clock with some fantastic craftsmen and other specialists to give this historic building rare features that make it truly authentic. There is no doubt that the new Scott’s Seafood in Folsom will be the hottest restaurant in the Folsom Historic District. In this article, we highlight some of those unique features.

To keep the historic atmosphere, we needed to use real bricks that existed when the roundhouse first stood there. We wanted the exterior of the building to make a bold statement, and these bricks are a testament to that commitment. 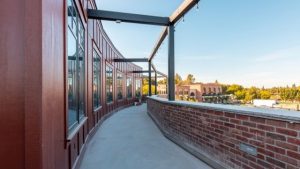 It was crucial for us to make the new Scott’s Seafood, an inviting restaurant. On the inside, there is a solid wall, but we decided to put three 6×8-foot windows on the outside of it. Sierra Pacific makes these windows.

These massive windows will have a photo-etched onto a sheet of glass that will have an LED light to illuminate the photo. Anyone walking by at night will, therefore, see Locomotive 3 inside the building (the etched photos depict a real locomotive and the people servicing it).

The exterior paint color of the building was selected based on its historical significance to the time when the roundhouse was in use. This particular paint color is referred to as Carter Brother’s Tuscan Red. The color dates back to years prior to 1887 when it was used on more than 5,000 railroad cars around the west coast and South America.

Headwaters Construction Corp. is pleased to use this paint color that adds authenticity to the roundhouse alongside many other time-appropriate features. 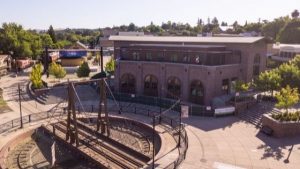 How often do you come across a building with operable 12×17-foot wooden doors? This roundhouse has them, and for very good reason. At the time when the original roundhouse was built, these doors were a necessity because they used to be wide enough to allow a steam locomotive into the roundhouse.

Thanks to Cross Roads Lumber, this roundhouse will also have the same sized doors that are similar to what existed in the 19th century. The ones we are using are thick and made from reclaimed redwood to match the historic nature of the building.

Another important architectural feature that we included was the clerestory windows. This feature was a norm back in the day when the roundhouse was in use. The importance of these windows was to flood the roundhouse with as much natural light as possible.

The windows weren’t easy to construct since they typically don’t have any right angles. However, our determination to bring each detail of the original roundhouse back to life ensured that we got the job done.

There are many more unique features that make this roundhouse a special gem in the Historic District of Folsom. Our Headwaters Construction Inc. team is proud to have played a part in bringing this piece of history back to life. The Williamette Wineworks will be up and running in just a few short months. The opening of Scott’s Sea Food is still being determined. At Headwaters Construction Inc., we are fully licensed as construction contractors in California, Oregon, and Washington. Get in touch today and let us talk about how to bring your commercial project dream to reality! Make sure to check out more of our projects! 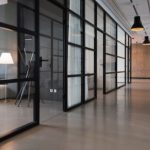 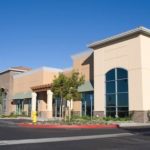 How Strip Malls Are Being RenovatedConstruction, Renovation